In the last 7 years 41 boreholes have been drilled in Makoni North, Ward 1 and Ward 2 and 14 boreholes in Tanda.
Makoni North is situated east of the capital of Zimbabwe, Harare. Chikore is the main settlement in this area. Before the independence of Zimbabwe, Ward 1 was a so-called Reserve. African people were obliged to live there. The surface of the area is 150 square kilometres. Ward 2 has a surface of 377 square kilometres. Before the independence white farmers used to live there. They were mainly cattle farmers. After the independence in 1980 the area was resettled. Africans from all over Zimbabwe came to live there. The boreholes used for their cattle (which had been left behind by the white farmers) was the only source of water in this area. After 1980 nothing was done in water supply for the new people.

Tanda, Ward 36 also situated in Makoni North, used to be a former Reserve as well. It is situated 30 kilometres east of Ward 2. 14 boreholes were drilled in this area, all of them contained water. Most of these villages still used drinking water from rivers. They were very grateful for what was done for them.

In Sanyati we drilled 3 boreholes, 2 of them contained water. We also flushed an existing borehole. For more than 12 years the water in this hole was too dirty to drink due to mud and rust. Sanyati is situated west of Harare. It is a difficult area to drill due to the huge layers of Kalahari sand. The drilled holes had to be protected not only with pvc pipes but also with steel pipes.

In 2016, 2017 and 2018 we went to Guruve north, an area north of Harare. We drilled 27 boreholes and  22 contained water! Guruve North is by the way an area as big as the provinces North Holland and Utrecht.

In 2019 we went to the Mudzi district, an area North West of the capital Harare. We drilled 6 boreholes and 4 contained water. 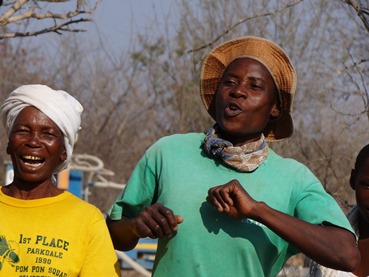